Jenga is played with 2 or more players. Build the tower by putting three blocks in every layer. Once the tower is built, let`s start the game. Try to take a block out by tapping the short side of it, or by pulling it out, your decision. You can’t remove the blocks of the three highest rows. Once you pull your block out, place it on the top of the tower, same way as you built it. Take turns doing that until someone makes the Jenga Tower fall. 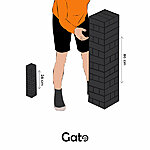