Roll up to 3 times each turn to rack up the best possible score. Decide which dice combo you're going for. After each turn, write your score in one empty box on the score card.

Players take turn in throwing 5 dices. Each turn consists of maximum of three rolls, so you have to decide, which combo is the most useful for you.

The first roll must be made with all five dice. If the player chooses to roll a second and, if desired, a third time, he may pick up any or all the dice and roll again.

It is the skillful use of these two optional rolls of the dice that can turn an unlucky first or second roll into a high-scoring turn. A score must be entered after the last roll in the appropriate box or a zero entered in a box of the player's choice.

Each player keeps his own score on a YAHTZEE score card to be marked with the player's name.

To determine who goes first, each player rolls out all the dice; the player with the highest total starts the game. The play then continues clockwise.

A TRIP AROUND THE WORLD

Place your buttons on the same coloured circles. This area is called the nest. Each player rolls the dice once. The player who gets the highest number, starts. Player with highest score rolls again. If he gets 1, he can place one button on the track. If he gets 6, he can place one button on the track+ roll again. 2,3,4 and 5 won’t allow you to put buttons on the track. Every player gets three chances to roll at a time. From now, the play continues clockwise. If your button reaches the same ring where somebody else already is, their button gets sent back to the nest. If you’re on the track, roll the dice and move for as many steps as the dice shows. 6 allows you to roll one more time. Player who gets all their buttons to the vertical rings first is the winner. This place is called “home”. If a player gets more points on the dice than he needed, he just bounces back and waits for his next turn. 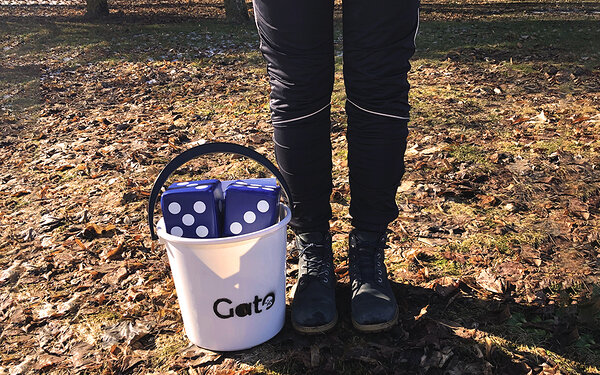